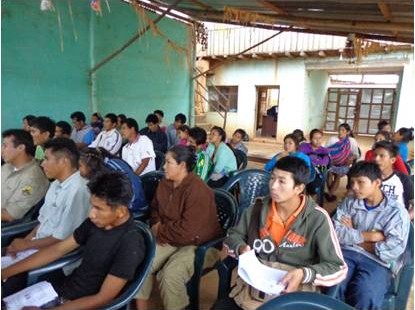 The indigenous peoples of Leco de Apolo, reconstituted in 1996, establishes the Indigenous Organisation of the Leco de Apolo Peoples (CIPLA) in 1997. CIPLA represents 21 communities and a population of 4000 inhabitants. In 1997, it requests from the Bolivian government to receive collective rights over their traditional areas of occupation. As much of its territory overlaps with the Madidi National Park, the Leco territory and the protected area have, to a large extent, a common interest to fend off the threats to the area.

A major threat is the potential exploration and exploitation of hydrocarbons, a subject that has been addressed in a prior project that was completed also with the support of the PKF Foundation. More recently, the gradual increase in gold mining had significant negative impacts on other indigenous peoples. The support of PKF Foundation is now obtained to strengthen the capacities of control and governance of CIPLA and communities to manage and appropriately regulate access to, and exploitation of, mineral resources in the territory under the Life Plan and zoning of the indigenous peoples of Leco de Apolo.