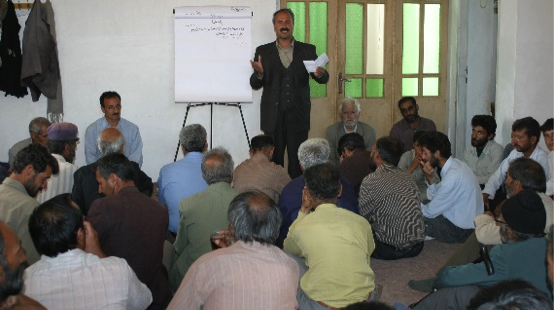 The Abolhassani Indigenous Nomadic Tribal Confederacy has lived and migrated seasonally in a peri-Central-Desert area known as Touran, one of nine UNESCO Biosphere Reserves in Iran. Its ancestral domain—a nomadic tribal conserved territory— covers about 74,000 hectares within the Reserve. In recent years, the territory and tribe have suffered from significant climate change through increasing frequency and severity of droughts. Testimonies of nearly total outmigration of the population are contained in their recent oral poetry and lore. This small Tribal Confederacy, however, has learnt on its own to live with droughts. Drawing from traditional resourcefulness and its own collective wisdom, it developed and implemented a composite climate adaptation strategy through strengthening customary laws and practices and supplementing those with innovative initiatives. All the while, they kept observing the behaviour of wildlife, which is sacred to them (the elders say that their presence brings blessings to the land) and noticing benefits for them as well.

Despite unprecedented droughts, the Abolhassani have managed to cope by reinventing agriculture and – with some help from the government – by enhancing it with irrigation via ancient water channels (qanats) and water storage systems. Instead of depending only on rain-fed wheat and barley, as they did in the past, the Abolhassani have learned to use agriculture as supplementary feeding for their migratory herds of sheep, goats and draft animals—thereby reducing grazing pressure on natural rangelands. They have also reintroduced drought resistant indigenous breeds of animals, and, in the past dozen years, undertaken to cultivate several new crops or reallocated them to animal feeding. While doing this, they also implemented a most successful micro-credit programme and reinstituted the traditional intertribal mutual aid and solidarity agreements for sharing rangelands among drought affected tribes—a practice that had been forbidden by government agencies.

The remarkable livelihoods innovations of the Abolhassani include agricultural crops for income and fodder. Pistachios, cotton and watermelon, sunflower seeds and barley are used for both direct sale and to improve the feeding of livestock, bringing in better income and securing livelihoods. The microcredit programme supporting this has also helped to revive the customary governance system of the tribe. Through cultivation of garden vegetables and some fruits, which is an innovation, health, nutrition and food security have also improved, and the community—now organised— has managed to exert more pressure on the government for better services including for education and health care, small-scale piped water for drinking, public electricity and telephone coverage.

The territory of Abolhassani confederacy has remarkably high animal and plant diversity. An estimated 800 plant species have been identified, with more than 20% endemic and some still unknown species. There is an exceptional diversity of wildlife including the endangered Asiatic cheetah, Asiatic wild ass (onager), Iranian leopard, Houbara bustard, gazelles, and others. The Abolhassani rarely hunt animals and respect the daily division of their water sources between wildlife and livestock—facilitated by the improvement of water supply and management system. They have reinstituted a pastoralist tradition called hanar—watering the animals once every two days instead of everyday during the cooler autumn and winter seasons, which allows the animals to go twice as far, relieving pressure on natural range due to better distribution of grazing. The revival of the hanar system has also facilitated sharing available water sources effectively between livestock and wildlife.

One of the most effective signs of the resilience and adaptability of this indigenous nomadic tribe is that despite the worsened drought situation, their population has remained stable. This small tribal grouping is about 200 households (“tentholds”) amounting to some 800-850 souls, organised in twelve tribes. All the adaptation ideas were generated by the tribe itself, making their initiatives socially sustainable. Ecologically, rangelands are recuperating through the reduction of exclusive reliance on natural grazing and forests are under sustainable management regime. The community self-confidence has enabled them to find additional support for their projects from government and NGOs. And women are benefitting, for instance by undertaking credit and engaging in diversified livelihood activities (e.g., handicraft, dairy production, sustainably collection of non-timber products from forests and rangelands). The Women Committee is now also included in decision-making, and is active in developing the tribe’s Participatory Geography Information System and participatory video products.

Their whole territory of the Abolhassani confederacy was confiscated by the regime of the Shah in 1963 in the guise of nationalisation. The confederacy is now again fully involved in its tribal governance, with each one of the 12 tribes represented in decision making by two trusted community elders in the tribal Council of Elders. The restoration, strengthening and registration of their tribal system is a main element of community empowerment. The Council of Elders and its constituent Women’s Committee give voice to the tribal confederacy. The sustainable livelihoods fund (sanduq) also ensures collective ownership of tribal assets and initiatives. All decisions are discussed in the Council of Elders, and approved only after consultation with each of the 12 tribes. This setup makes for participatory and deliberative democracy.

The Abolhassani have promoted their successful adaptation model among other communities by organizing tribal leaders’ gatherings, and documentary videos, photo-stories, PowerPoint presentations and articles for both Iranian and international forums. As they encourage and help many other tribes in the region to organise, join the federation of indigenous nomadic tribes of Iran and take control of their own affairs, they are discovering that mutual solidarity is a win-win strategy, that empowering other tribes enables the extension of migratory routes and grazing lands and creates mutual support systems, while strengthening the negotiating power for all tribes in the region. Their success is the success of all mobile indigenous peoples of Iran.

Presentation -in Iranian language- of the Abolhassani at the IUCN World Parks Congress, Sydney, november 2014