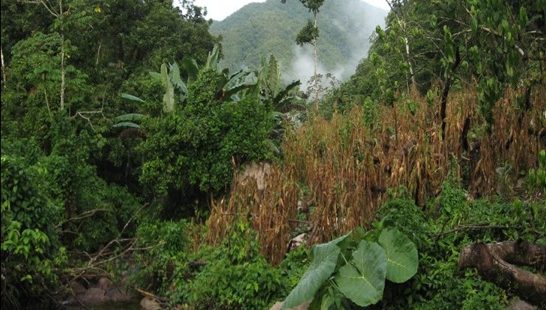 The micro region Poniente of Bacalar, in Quintana Roo, Mexico, is mostly inhabited by Maya communities. Lately, as a result of ignorance of collective rights, more and more ejidal land has been sold there and, with that, land use changes have brought about deforestation. This was fostered by the intergenerational gap between parents and children, as the new generations have lost a great part of their sense of belonging to the land. In addition, the transnational company Monsanto has acquired permits from government agencies to plant genetically modified organisms. Since 2005 this took place at an experimental level but later, as of 2012, the permission was given for commercial operations and for an indefinite period. Faced with this threat, beekeepers and peasants filed petitions for a stop order to the permit granted in their territories and for the damages that would entail, mainly due to the fumigation of glyphosate— an agrochemical associated with the planting of transgenic soy. The major concern is that the company Monsanto requested an indefinite permission to plant transgenic soy in the region. If this is granted, the company will never leave and the Maya communities will not be able to maintain their way of life.

Beekeeping is an ancient activity rooted in Mayan culture. With the entry of transgenic products, there is a risk that organic honey, which is the main source of income for Mayan families in the region, will be affected. Another important concern is the contamination of the groundwater by the filtration of the agrochemicals that the transgenic soy requires for its cultivation (mainly glyphosate). Biodiversity loss is another of the expected impacts, whether due to the use of glyphosate in transgenic soybeans or the deforestation of large areas of forest, since agro-industrial monoculture models require large tracts of mechanized and irrigated land. One more risk has to do with the displacement of the milpa system, which produces a great diversity of foods and is the basis of food security for the Mayan families of the region.

In the face of these threats, a strategy has been developed that addresses legal defense, but also strengthens the social base, and in particularly the ejidal assemblies where the communities have the right to establish regulations for their territories. For that reason, the internal regulations of the ejidos are being revised to establish that the land cannot be used for transgenic monocultures. In this way, while the stop order trials are proceeding, the people are also trying to recover the decision-making structures that involve the entire community. This is crucially important with regard to the Indigenous Council, where representatives of the Mayan people from different communities participate as spokespersons for their community assemblies, achieving greater unity and force at the regional level. Representatives from several communities have been working to create the Bacalar Maya Regional Indigenous Council. With that, if the state judicial power will not protect the communities, it is the communities themselves that will exercise their right to self-determination, self protection and self-governance.

The PKF Foundation grant supports the Maya communities to meet, organise legal assistance workshops and legal training, carry out exchange visits with other communities involved in the defense of their territories and the reconstruction of their traditional ways of self-governance, and to produce printed, audio and video materials for the diffusion of information on transgenic substances. Ultimately, what the communities wish to achieve is an alliance of Maya people at the peninsular level— an alliance able to defend its territory and build its own autonomy.