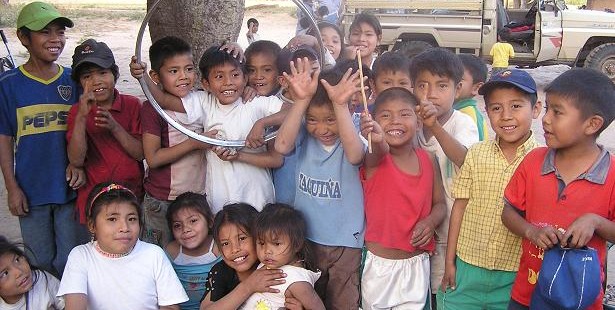 The core of the group is composed of six Guaraní-Isoceño young professionals aged between 20 and 36 and trained in law, biology, sociology and accounting. These young people were born and grew up in the Isoso region of the Bolivian Chaco, and once their obligatory school was terminated, on their own initiative, decided to continue studying and completed a university degree. Their main motivation was the idea of getting back to their TCO and giving back something of what they had received… Specifically, the initiative supported by the PKF Foundation will make possible to organise a variety of dialogues and consultations, to begin with internally within the Kereimba group, but later also with partners at wider institutional and organizational levels. The topics of the dialogues will focus on the key issues of livelihoods and development of the Isoceño-Guarani People: land and territory, indigenous autonomy, productive development in harmony with the environment, organizational strengthening, cultural identity, development planning in a comprehensive TCO long-term vision… The group hopes to strengthen its own capacities and potentials and pay due attention to modernity while never forgetting its cultural roots.

The purpose of the initiative is to promote youth leadership through a process of reflection and construction of an inter- and intra-community “Common Agenda” to defend the livelihoods and development of the indigenous people of Upper and Lower Isoso. It is hoped that this will substantially contribute to the restoration of a local common understanding and meaning of what local environmental governance “means”, including by focusing on approaches and mechanisms for the resolution of conflicts. And it is hoped that a participatory Comprehensive Management Plan will be developed for the Indigenous Territory, that the Kereimba group will develop a clear definition of its formal and legal identity and that it will establish fruitful contacts with other groups and management organizations in the higher watershed of the Parapeti. The Kereimbas estimate that their work will be facilitated by the major flux in political power that characterises the current political reality. As a result of a popular referendum, the elections of December 2009 defined the jurisdiction of the Charagua municipality as an “Indigenous Autonomy”, a new figure set by the State Constitution passed earlier that year. The process of clarifying what the Indigenous Autonomy status actually implies presents a valuable opportunity to reorganise land uses in the area, conserve biodiversity and ecological functions of natural ecosystems, and halt the advance of deforestation and the irrational use of water resources, both at the surface and from the aquifers. The Kereimba will meet and organize on the impulse of their profound will to maintain alive their culture, promote the development of their people and strengthen the defence of their territory.