Mining in the Philippines, and especially in Palawan, is a major threat for the Indigenous peoples and their rights to their land. Recently, Palawan Indigenous organisations were warned that MacroAsia Corporation was organizing a delegation of 27 ‘fake’ tribal leaders to meet the National Commission on Indigenous Peoples (NCIP) in Manila.

The meeting was organised to show that there was a “social consensus” for their mining operations to start. In fact, these 27 tribal leaders were not chosen by the communities but appointed by the very same NCIP without any process of Free Prior and Informed Consent (FPIC). And yet, these same people will be used by MacroAsia to get the Certificate of Precondition from NCIP, an important document for mining operations to be allowed to start. To counter this manipulative process, the Ancestral Land Domain Watch (ALDAW) Indigenous Network organised to bring a group of legitimate and well recognized tribal elders to Manila, led by the ALDAW chairman Artiso Mandawa. The PKF Foundation decided to support this urgent mission. 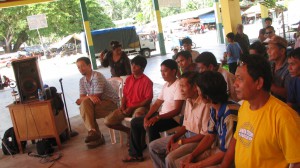 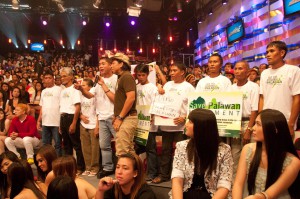 The ALDAW delegation met a significant number of congressmen and administrators and participated in a press conference. They also visited NCIP’s new chairperson on her first day of duty and made a ritual offering to wish her success in the newly acquired position. Delegation members also participated in radio shows and appeared on prime-time TV shows to maximizing the effect of their Manila visit and call for support to the “No 2 Mining in Palawan” Campaign. The positive outcomes of the Palawan delegation’s mission can be outlined as follows: