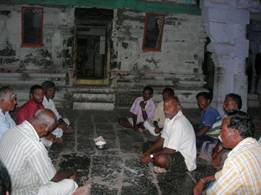 PAYIR, a group of Ghandian inspiration, has been working with the Thenur & Kannapady communities in Tamil Nadu, southern India.  With the help of the PKF grant, PAYIR will now promote community cohesiveness and solidarity through revitalizing the local “sacred groves” by planting and managing native species.  The groves degraded after the state took control of common lands, including temple lands, after independence.  The land will now be leased by PAYIR but worked, planted and managed by the community.  The improved groves are expected to improve local livelihoods by recharging the local aquifer. The initiative will rely on PAYIR learning center and the village elders and will organize special initiatives to engage the local youth.