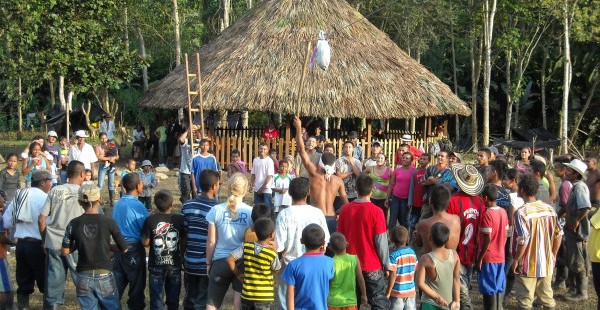 The Colombian government claims that the Urabá region is pacified… but the only peace that people speak about in the region is the peace of the graves, the peace of those who remain silent for fear of guns and intimidation…

After a collective situation analysis of the harassment she was subjected to by armed groups in the region (military, paramilitary and guerrilla), the community of San José de Apartado transformed itself, in 1997, into a Comunidad de Paz on the basis of the following principles:

From that time, this group of peasant families began to reflect together on how to confront peacefully the armed groups who harass them daily and attempt to recruit them in their midst. They also thought about out how to produce collectively so that the gains are shared between the people who work, and how to make sure that that women can work and hold positions of responsibility as much as men. The community even began to develop its own alternative system of education, teaching its own history and that of its leaders murdered for defending their project of a different life, a life that would allow the development of alternative solutions to problems (e.g., solutions based on solar energy, knowledge of midwifery, knowledge of plants and many other types of indigenous knowledge). The community has thus managed to transform places of horror and murder into the halls of its University for the People (the community has suffered more than 700 human rights violations and more than 172 murders).

he Comunidad de Paz is a place of resistance to the forced displacement of peasants in Colombia. The political and military pressure to abandon their territory is constant, and the major economic and political groups in the country have their eyes fixed on the community that lives in a place that is both rich in natural resources and an important corridor for the commerce of drugs. On the one hand, the community has received some protection from the Inter-american System of Human Rights and Constitutional Court, in defense of the principle of neutrality in conflicts. On the other, the government sees it as a “guerrilla community” and provides no support against the murderers and those who attack it. But many are also the ones who defend it, including priests, philosophers, former mayors, and peace activists from all over the country and the world.

The Comunidad de Paz began in 1997 amid threats, massacres, displacements, dismemberments…. “As a community, we declared peace with the firm intention of staying together to avoid being expelled out of our land, with the conviction that we will never support any armed actor— neither the army nor the paramilitary guerrilla.”

The organization has the profound intent of fighting for justice and for the dignity of every member of the community. It is because of that that “…we live in solidarity with one another and with other communities who share our same conditions.”

Despite the community having suffered more than 800 human rights violations and more than 200 murders, its 230 families are adamant about finding a way to create a space for civilians in the midst of war. For that, they espouse the principles of neutrality, solidarity, truth, justice and transparency.

Despite all the murderous activities around them, their approach is firm: “We are convinced not to retract our principles, which are based on community work, group work and action in solidarity. We believe strongly in the memory of our dead because they have built what is now the community, they are still with us and they show us that it is possible for a community to live a different reality than individualism, injustice and war. The memory gives us the hope that the injustice of yesterday and today will not happen again, that the future of humanity is good. Memory is a commitment to history and it is this that that allows us to stand for dignity and freedom. Keeping our memory always in front of us in not “living in death” but “living in life”. And that life has dignity.”