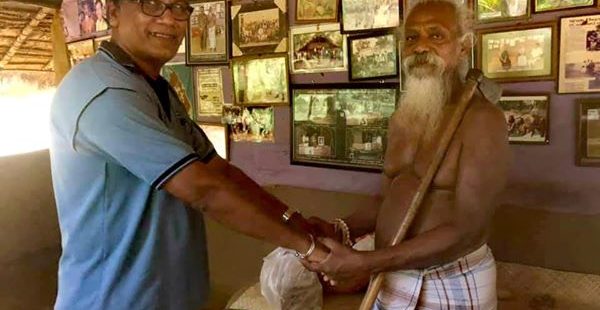 The Vadda are an aboriginal people in Sri Lanka, known to have inhabited the island well before the arrival of the Aryans. Currently, they live in scattered spots and some groups have mixed with other ethnic groups in the country. As they are a small minority, both numerically and culturally, their original language, rituals and unique knowledge and relationship with the island’s forests and animals are prone to gradually disappear. Through this initiative, the Centre for Environmental Justice (CEJ– a nationally recognized environmental organization in Sri Lanka) will work to help the Vadda preserve their language and capacities by means of recordings, publications, and events. In addition, measures will be taken to resolve conflicts between forest governing bodies and the Vadda.  The initiative will take place throughout 2021.

This initiative will initiate measures to conserve the Vadda language and cultural habits that are gradually dying due to modernization. Having evolved in ways that are connected to and dependent on nature, the Vadda have learned to make a sustainable and respectful use of the gifts of nature and to relate with nature through several types of rituals.   Unfortunately, modernization and relocation programs have strongly affected this intimate relationship and, today, the Vadda face a gradual loss of their cultural values and traditional practices. Only the Vadda communities of Dambana and Hennanigala still appear to maintain their original tribal values, while most others have adopted modern practices and mixed, at least in part, with other ethnic groups and cultures.

This initiative wishes to strengthen the Dambana and Hennanigala communities and help them to preserve their original ways to improve their lives but also as a reference to other scattered Vadda groups and future generations. The initiative will focus on the production on a video repository subdivided under 9 themes that cover the Vadda culture and practices, and a vocabulary with pictures. These will be recognized as intellectual property of the Vadda people and will be available online only with the consent of the Vadda leader and for educational use. Along with that, four Vadda youth ‘education circles’ will be supported at village level to promote genuine cultural behavior and pride among Vadda children, also with the help of a Vadda pictorial dictionary developed for the purpose. A radio program will also be organized on the International Day of the World’s Indigenous People, in August 2021.  All this is in view of preventing the misuse of the Vadda culture and values by third parties — e.g. in trade and tourism — and encouraging the sense of identity, pride, and mutual solidarity among the Vadda themselves.

The second area of focus of this initiative is towards resolving ongoing disputes between the government agencies currently in charge of the forests and the Vadda attempting to practice their culture under the existing legal framework. Under ‘law and order’ rules, the Vadda are forced to follow a certain lifestyle controlled by the government officers. This includes limitations to traditional practices, such as hunting and performing the ritual collection of forest honey to be offered to the temple of the Sacred Tooth Relic in Kandy. CEJ will bring together government staff and Vadda communities to resolve the issues by respecting both environmental conservation objectives and the Vadda culture.

This initiative is co-sponsored by the Paul K. Feyerabend Foundation and the NGO Pro Natura of Switzerland.