With more than 11 million hectares, the Ayoreo territory in Paraguay covers much of the northern part of the country, in the Chaco.  In the late 1950s most of the local Ayoreo communities that used to live there were forcefully contacted, deported and sedentarised in missionary stations. Today, the 17 Ayoreo communities that were contacted in this way include about 720 families, most of whom settled outside their ancestral territory. Their existing organization – UNAP – represents 15 of such 17 communities. In the territory itself there remain six or seven groups that managed to subtract themselves from contact. These groups are called “groups in voluntary isolation” and refuse all contact with our world.   In the past 50 years, the gradual deterioration of living conditions among the contacted Ayoreo prompted the emergence of a self-critical vision about their own way of life, subject to foreign models imposed by the surrounding society. They came to the conclusion that the fact of being disconnected from their territory and its progressive destruction and disappearance are seriously threatening the Ayoreo physical survival as much as their cultural and spiritual life. Deforestation and destruction also put at grave risk the integrity of the communités in voluntary isolation, the only Ayoreo who remain in the ancestral territory and who take from it both physical and spiritual sustenance.   In this context, environmental monitoring is a practice that enables a stronger presence and offers more prominence to the Ayoreo, men and women, in their own territory. It does that by strengthening their ancestral knowledge about how to live with the land, and through the active transmission to the new generations of that knowledge about “living well”, and of the perspectives, practices and values that go with that.  Environmental monitoring is also, through an increased presence of the Ayoreo in their territory, a way to spontaneously increase its protection, as well as the protection of the Ayoreo groups in voluntary isolation. 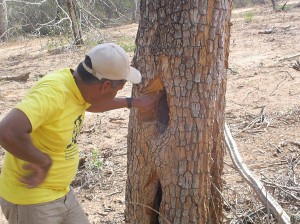 The initiative will support three trips by which two different local groups (Ayoreo-Atetadiegosode and Ayoreo-Garaigosode) will visit their ancestral land areas in the Chaco – one in the north-east and the other in the north-west. The trips will be made by taking advantage of the dry season and right after each trip a radio program will be dedicated to report the results of the travel to the Ayoreo poeple. Each trip will be documented with photos, life stories, videos, and mapping.  A written report will recount what the participants will have observed and systematize the acquired knowledge. And a video will be edited to document the journey for the competent authorities. These same authorities will later be engaged to discuss and provide support so that appropriate policies and practices can bring back to the Ayoreo people – at least in part – the authority and responsibility over their ancestral territory.