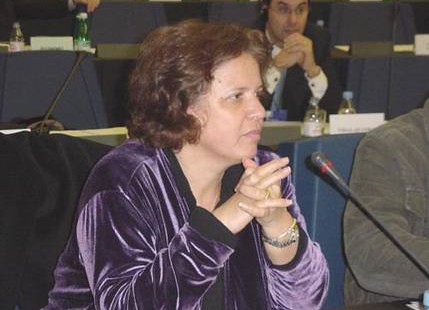 Daughter of General Matitiahu Peled, a man strongly engaged for a negotiated, peaceful solution to the Israeli-Palestinian conflict, Nurit Peled-Elhanan has been most painfully hit by the violence of such a conflict. In 1997 she lost her own daughter, Samarder, killed in a suicide attack in Jerusalem. Forbidding to Netanyahu and other Israeli officers to participate in the funerals of Samarder, she denounced the manipulation of fear in Israeli society, which serves to justify the occupation of Palestinian territories. Refusing service in the occupied territories, her two sons are also peace activists, members ofRefuzniks et “Combatants for Peace “, a new movement that comprises ex-fighters from Israel and Palestine.

Nurit Peled-Elhanan received in 2001 the Sakharov Prize of the European Parliament for human rights and freedom of thought.

“We must all apologized to our children for not having been more vigilant, for not having fought hard enough to keep the promise of a better world, for not having refused earlier the virus of hate and for having let them become victims of an horrible contamination—the mental contamination that affects all of us. Let us look at their small, innocent faces, stupefied and without illusions, and let us ask ourselves: “Why is a strike of blood cutting through the petal of their cheek?”

Listen to this great talk of Nurit (in two parts):